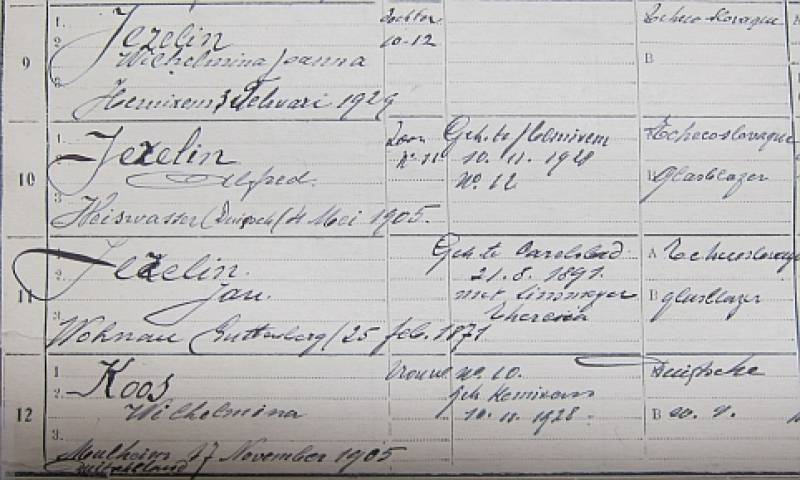 Notice that the father Johann was registered as Jan and he was born in' Wohnau'. Everywhere where he was registered or on a passport there is always a different place mentioned. After a lot of searching and learning time to read old German, it is now certain that he was born in Antonienthal (today Antonínův Důl) - Czechoslovakia

Jezelin was first registered as Jecelin and then overwritten with a' z'. Presumably this has been asked to have a more French sounding name.

At this address we find father Johann sr, son Alfred and Wilhemina Koos. They are not married yet. Father Johann sr officially moves from Eindhoven to Hemiksem and leaves his wife. He would never divorce her but left her because of her sect life. We don't know where Alfred and Wilhelmina Koos lived before. Alfred has certainly worked in a glassworkshop in Herentals, where there are plenty of clues for it. Unfortunately, I have not found anything in the Herentals archives yet. In Eindhoven, I also find no trace of Alfred. He did not live with his parents and sister, but together with his brother. We don't yet know where he came from on 11.10.1927.

In this house Alfred is married to Wilhemina Koos and they also got there their only child Wilhemina (nickname Minny). Later in 2014, after her death, Minny will be transferred to the mortuary of the undertaker who is based at this address today. This happened on April 13th 2014. 13 is a very special number for Minny. All the important things in her life happened on the 13th, time after time. Without being superstitious, it has become increasingly noticeable over the years.